Continuing our theme, today it is Easter Sunday, and that is now the traditional day for holding Easter egg hunts, and for eating these sweet treats. However, there is more to the egg than just fun and pleasure. It is the perfect symbol of creation and its mysteries; like the infinity sign, it can be drawn without taking your pen from the paper, and even better, drawing an egg can be accomplished with no change of direction at all. Also the contents of an egg carry the promise of life never ending, for they will grow to lay new eggs or provide the necessary for their growing, until the end of time.

There are an enormous amount of birds and eggs on cigarette and trade cards, but for our purposes here is just one.

If you look closely at this card, there is a line around the egg. This means that if you are careful you can bring the egg part away from the background and fold it down along the serrated line below the egg so that it stands proud and alone – we call these cards cut-outs, but in America they are referred to as either die-cuts or stand-ups.

Once again we have the ancient Egyptians, Greeks and Romans to thank for associating the egg with rebirth and creation. The Egyptians buried eggs in their tombs as an offering to their gods so that the life of the entombed would carry on and be reborn in another world. They also believed the world, and all humanity, came out of a very large egg shape that appeared in the sky. Intriguingly some call this the “Cosmic Egg” which has more than a hint of ufology. The ancient Greeks and Romans, along with the Chinese, all hand-coloured eggs for luck, and would give them to their friends around the start of Spring.  This was actually one of the origins of the colourful boxes that Easter eggs still sometimes come in, because at one time a chocolate egg could only be a rather unexciting brown however you jazz it up, like our card, Wills “Do You Know” first series, (1922) 14/50 – with its satin bow and lettering). 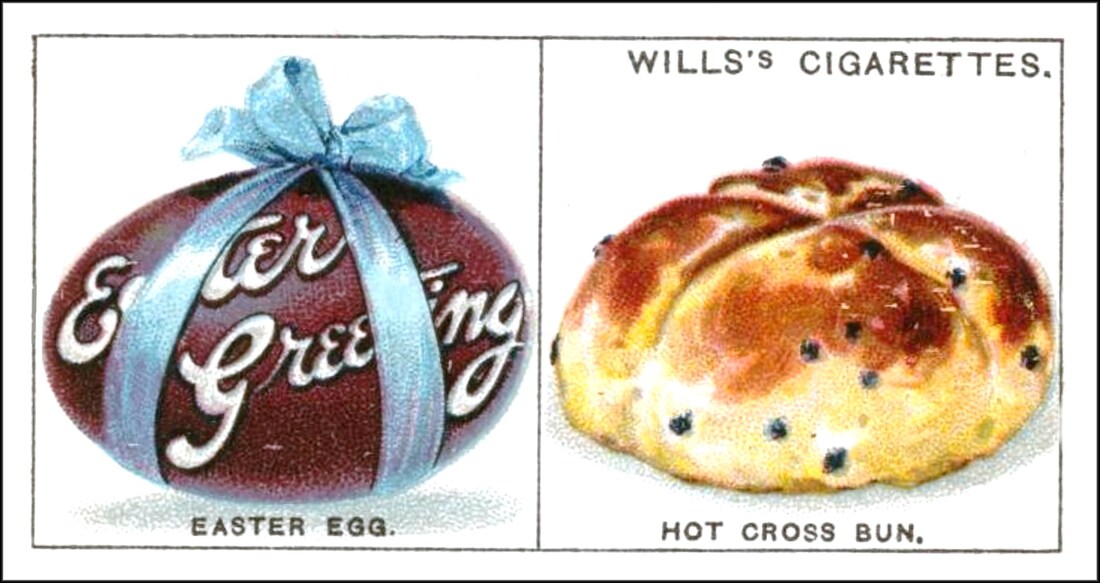 This is despite the fact that the egg in nature can be wonderfully colourful. If you dont believe us, check out the range of cigarette cards at : https://digitalcollections.nypl.org/search/index?filters%5Broot-collection%5D=b50ab6f0-c52b-012f-5986-58d385a7bc34&keywords=egg#

As far as confectionery though, most early eggs were of plain or dark chocolate. Milk chocolate was known but seldom used, whilst white chocolate is a relative newcomer, only being introduced by Nestle in 1930. However these days it is much easier to make coloured and even marbled chocolate, which is also better for the planet as manufacturers do not have to use great quantities of cardboard and wrapping to disguise a basic brown egg.

In the north of England there was a curious custom called egg rolling, where children and adults came together to roll an egg, hard boiled and decorated, down hills. If they lost balance and tumbled after it was all the more fun. These chromos, courtesy of the Patrick Marks Collection, for which we would like to say many thanks, seem to prove that egg rolling was a European custom as well. 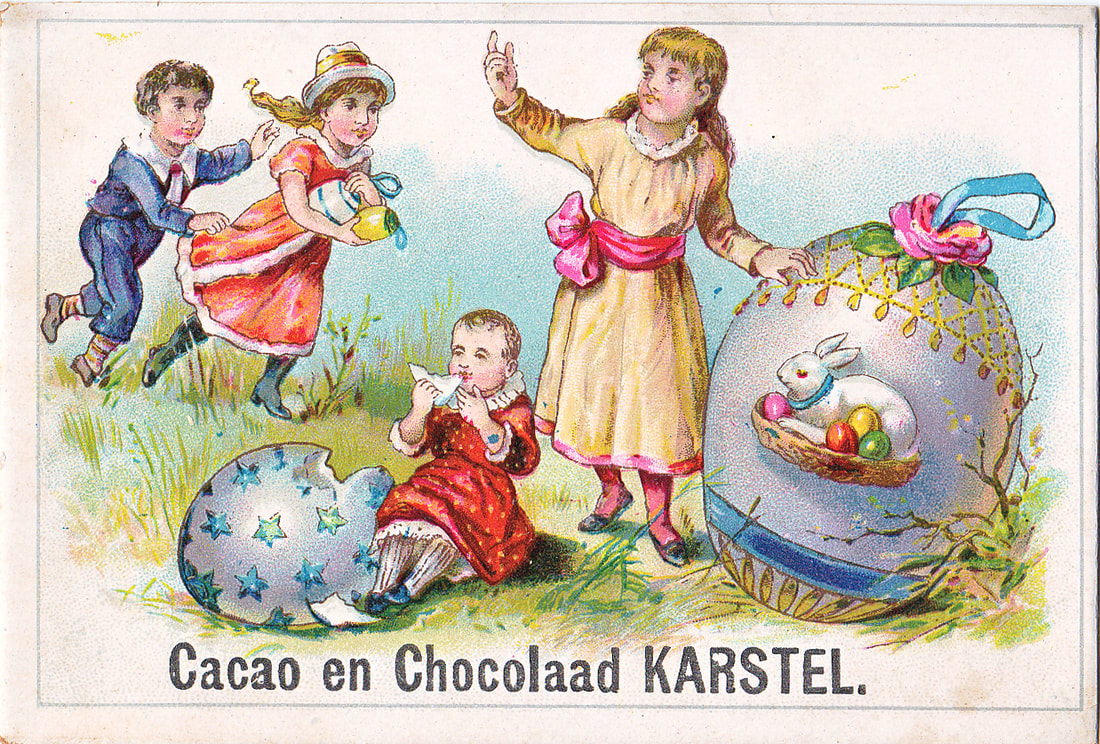 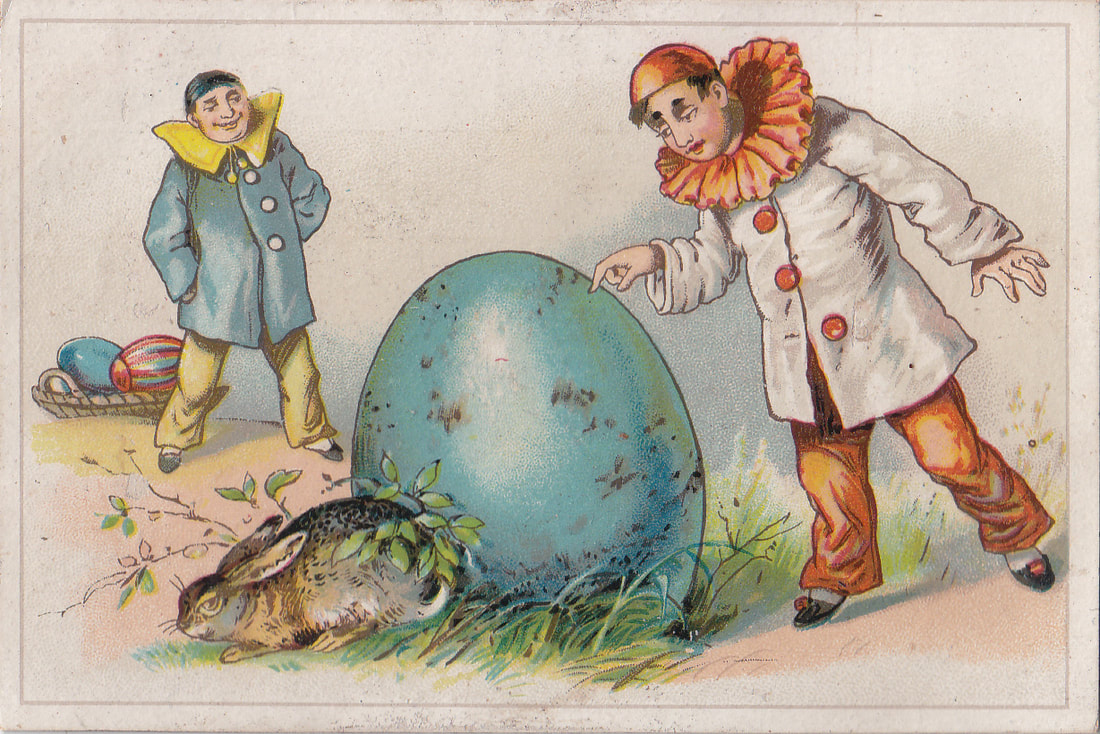 As the Romans colonised Europe, the customs and traditions had started to become intermingled; once they reached Germany the egg symbol of Eostre also became a symbol of rebirth and everlasting life, and interestingly in Germany we find that eggs started to be placed in graves almost as soon as the Romans had arrived in many areas. It is possible that the annual custom of egg rolling at the White House also came across with German settlers, though the official name of the “Easter Egg Roll” makes it sound like a competition for the best breakfast. Anyway, curiously this early chromo has an egg with stars and stripes on it, just like the American flag. 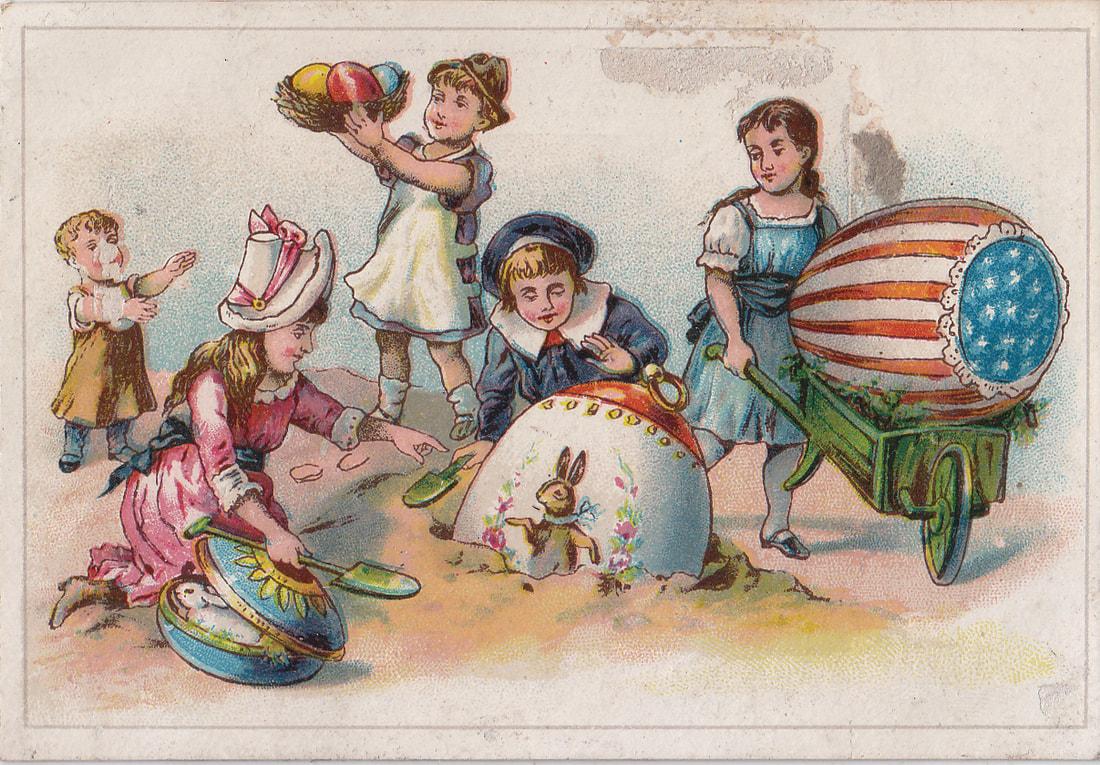 We can also thank Germany for the Easter egg hunt, the first of which was organised by the Protestant Reformer Martin Luther in the 16th century – and it was another German, Queen Victoria`s mother, who introduced the hunt to the Royal Family – with Prince Albert, another German, who continued it on to Victoria`s children. Somehow this simple pastime made the notice of the press, and by 1850 the whole nation were having Easter egg hunts, though at that time it was usually done on the Thursday before Good Friday (Maundy Thursday). 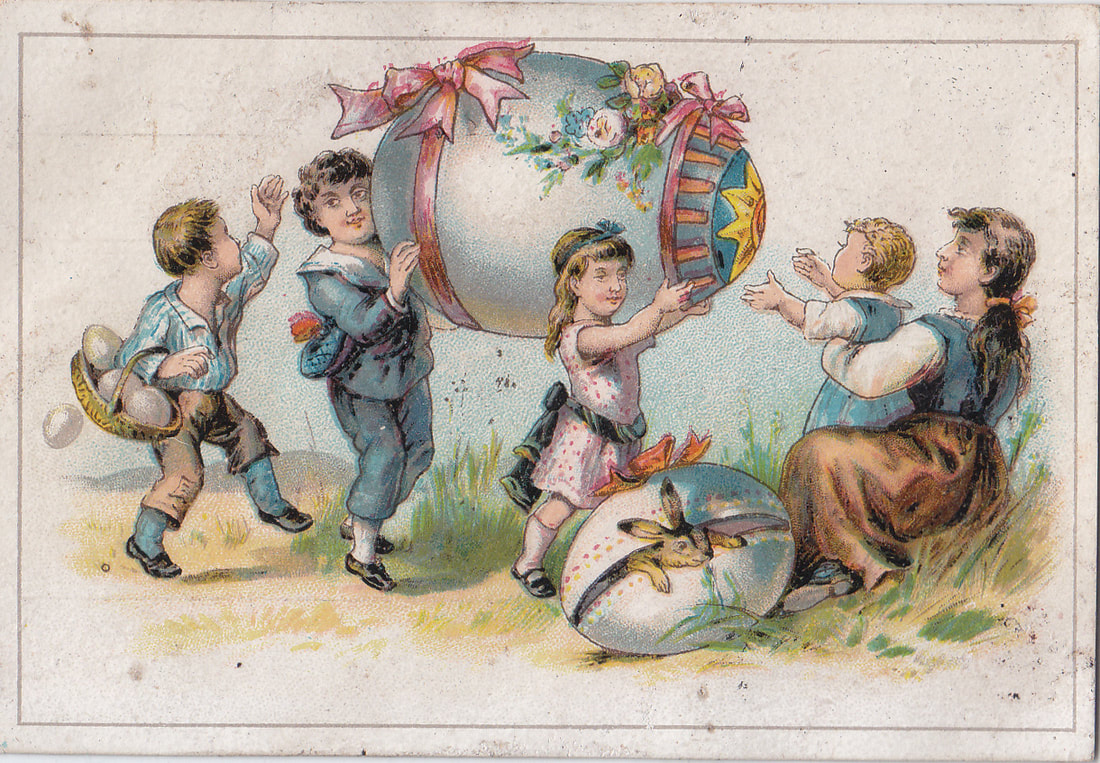 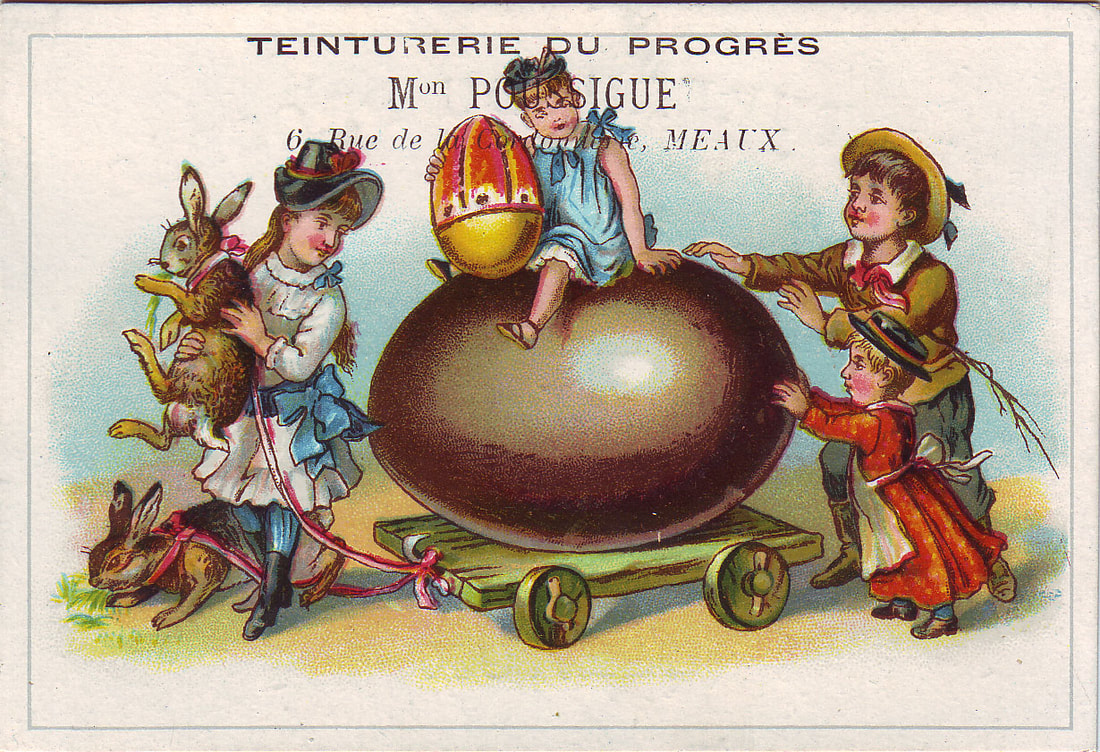 Most eggs were still hard boiled and coloured, but large cardboard eggs were starting to appear in which were hidden a toy or a dolls head stuck onto a chocolate roundel. You can see one like this, dating from 1924 and which was discovered very recently during the filming of an episode of Bargain Hunt to be shown in June, at https://www.belfasttelegraph.co.uk/entertainment/film-tv/news/easter-egg-made-in-1924-found-during-bargain-hunt-search-40270840.html

The idea of concealing a toy inside an egg almost certainly was suggested by the proliferation of postcards which had young children climbing into and out of real eggs. Here is one courtesy of https://thecardscene.weebly.com/ 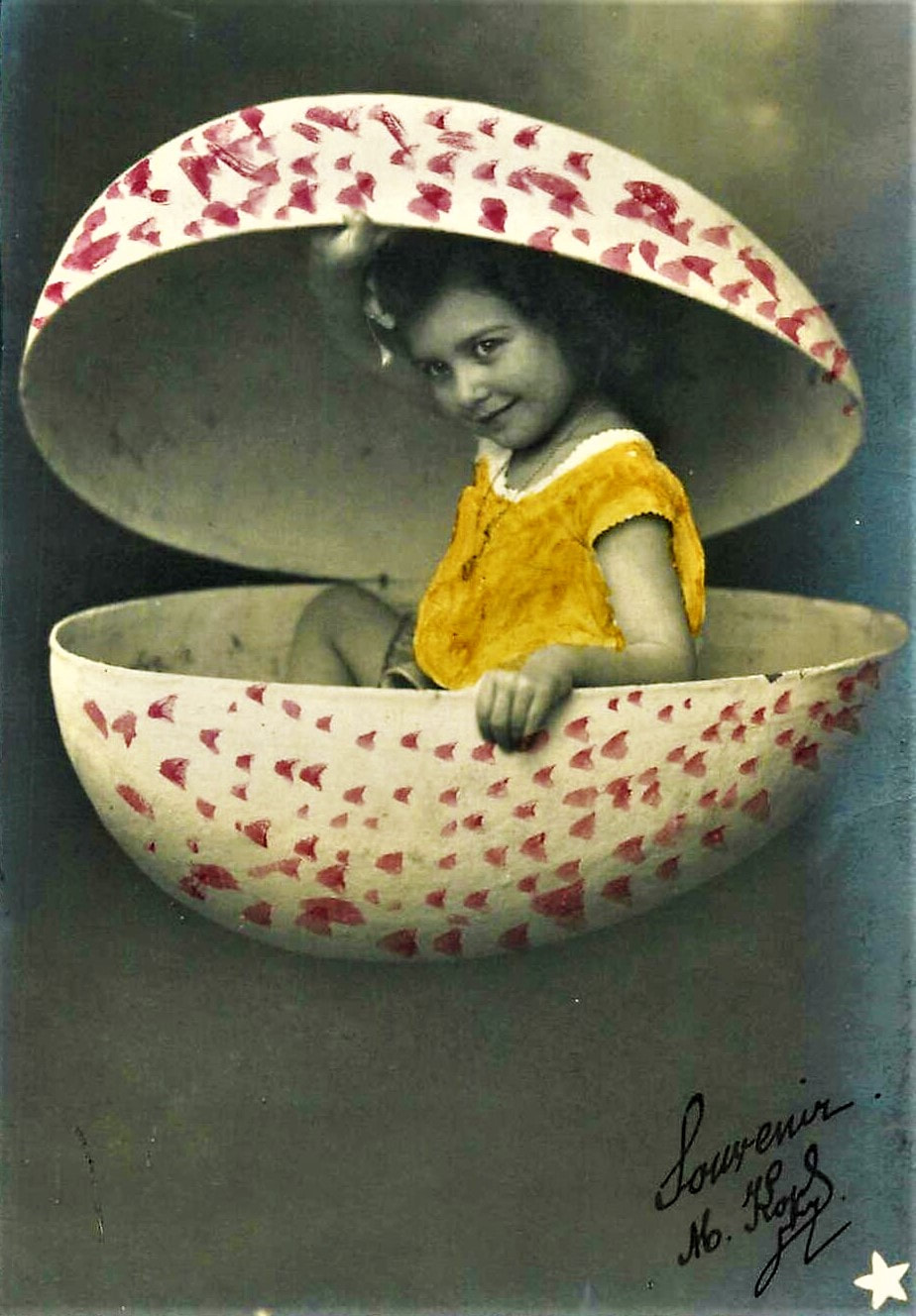 Even actresses were willing to join in this craze and here is Phyllis Dare, younger sister of Zena 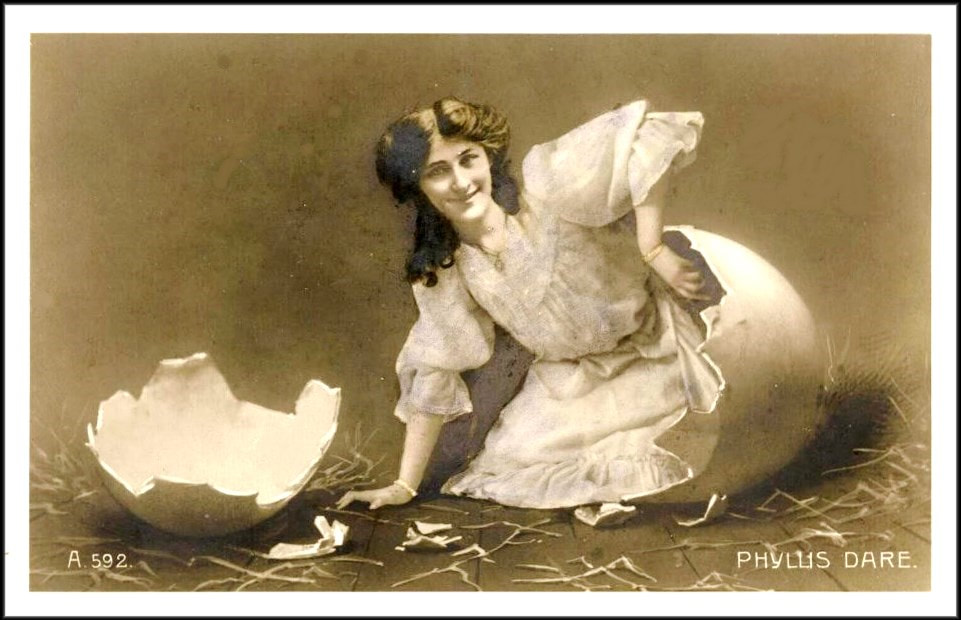 Zena Dare was a very popular actress specialising in musical comedies and pantomime, who has the honour of appearing on more postcards than any other female star, which makes me certain she must have climbed into an egg too. But I have yet to discover it. At the very height of her career, she gave it all up for marriage and became Mrs Brett, though like many actresses she was not just plain Mrs Brett, as he was the Hon. Maurice Brett, the son of Viscount Esher 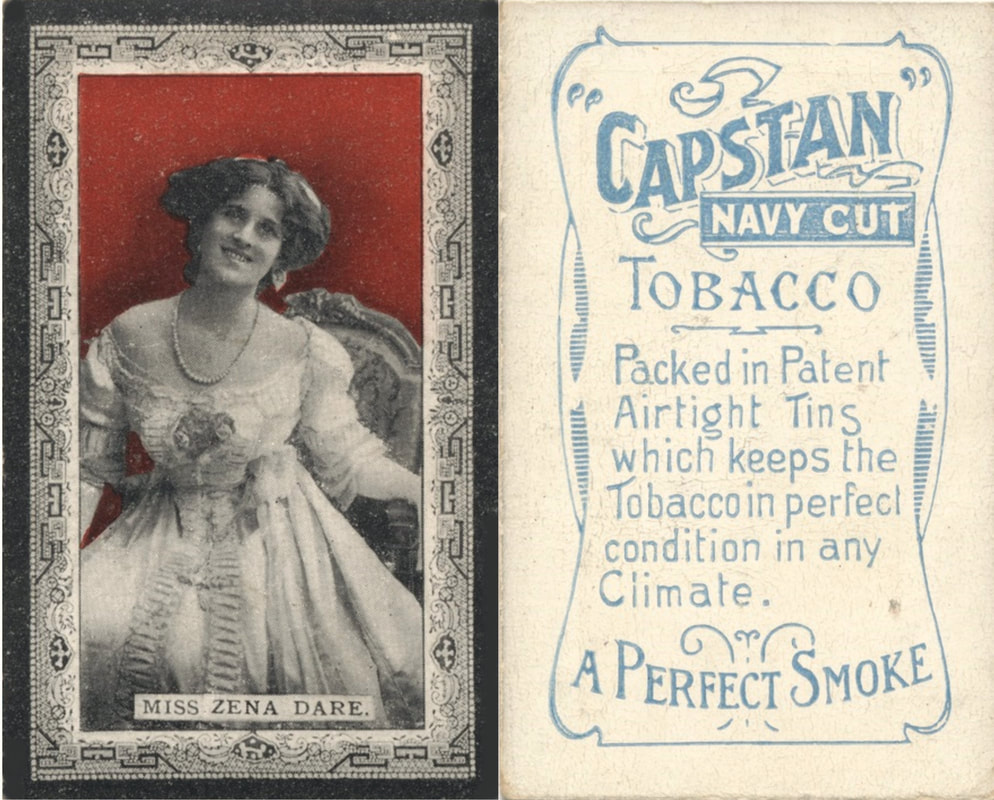 Now here is Zena Dare on an Australian cigarette card, W62-211a Wills Capstan brand “Actresses”. And you can read much more about Zena Dare at  https://www.imdb.com/name/nm0201147/

The first edible chocolate egg appeared in, you guessed it, Germany, though France also claims the honour of being the inventor.

The first chocolate Easter Egg produced in the United Kingdom was made by Frys in 1873 – and you can read more about that at :  https://www.prestonparkmuseum.co.uk/the-story-behind-the-uks-first-chocolate-egg/

Despite many problems with making the shape, the hollowing process, and the dual difficulties of keeping the sweets concealed inside and not tainting them, just two years later Cadbury was offering their own version. For some reason the Cadbury egg was immediately more popular, despite Fry trying to take back the lead by offering watches, jewellery and other goods as premium giveaways with their eggs.

The first egg with a creamy filling appeared in 1923, but the crème egg was only invented in the mid 1960s, and strangely it was called Fry`s Crème Egg, possibly because by then Fry and Cadbury had merged and Cadbury was the better known name, hence staving off any bad press. By 1971, as there had not been any problems, Cadbury decided to oust the Fry packaging and put their name to them instead.

The only set of trade cards issued with Easter eggs can be found at https://cartophilic-info-exch.blogspot.com/2021/01/peel-bowler-football-crazy-easter-egg.html  These were printed on the packaging and had to be carefully cut out. No good heading to the stores tomorrow to find if any are still on the shelves though because Peel and Bowler went into liquidation in 2019 after having been in business for almost sixty-eight years.

And to close, another popular egg is Kinder Surprise, made in Italy by Ferrero, who also make the small hazelnut covered roundels called Ferrero Rocher. “Kinder” is German for “children”, as in kindergarten – and the surprise bit is that in this treat a thick brown chocolate shell covers a white inner and once through that you find a toy which often comes in the form of a kit so that it fits inside. Sadly the only “cards” they issue are a range of thin chocolate biscuits which they call KINDER Cards, I suppose because they are slim and card shaped. Anyway these days their plastic, and sometimes metal, toys have become very collectable and there are premium eggs available just for  investment. There is an amazing site which claims to show every figure at http://www.thore.se/  and whilst not in the league of the Faberge Easter Eggs – read about those at https://www.faberge.com/the-world-of-faberge/the-imperial-eggs – Kinder premium eggs and some of the early sets can retail at over £100. The most expensive Kinder toy on eBay is a plastic VW Beetle from 1984, bidding starts at £99.99 plus £8.50 post at  https://www.ebay.co.uk/itm/VERY-RARE-Kinder-Surprise-Egg-VINTAGE-Toy-Blue-VW-Beetle-Kafer-Both-Bumpers-1984/313475283281?hash=item48fc953951:g:t4YAAOSw97BgDHYe   – while there is currently a set of 16 Asterix figures, dating from 1990, on etsy for £154.67 – see those at : https://www.etsy.com/uk/listing/254702035/super-rare-vintage-toys-collectible?ga_order=most_relevant&ga_search_type=all&ga_view_type=gallery&ga_search_query=rare+kinder+egg+toys&ref=sr_gallery-1-18&from_market_listing_grid_organic=1

For some reason I have not been able to dig up, Kinder Surprise eggs are not sold in America, so this means any toys that go out there often command a higher price. An idea for business expansion perhaps?

Anyway that had better end our Egg-stravaganza while it is still egg-citing, and not just waffle.

Pop back tomorrow for our Easter Bonnet Parade.

And catch up with our previous pair of Easter episodes at :

Yes collectors, this is your final chance to check the catalogue of Cigarette & Trade Cards, Postcards, Autographs & other Ephemera, which is now online, and free of charge to view. For speed, the link just to the cigarette cards section is

Now next weekend there will be another of our online special events, as we will be celebrating what ought to have been our 2021 Cartophilic Convention, again cancelled because of the pandemic. The reason for mentioning it here is to ask you all to h

Tonight we mourn one of our collectors and dealers, Roy Davis.  I first met him about twenty years ago, when he ran Middlesex Sports Cards Auctions out near Heathrow in Middlesex. These were interesting sales and always included many sc